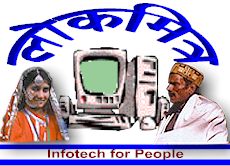 The LokMitra Pilot Project in Hamirpur district has been conferred with the Exemplary EGovernance Initiative-Bronze Award at the 7th National EGovernance Conference 13th to 15th November, 2003 at Chennai jointly organised by the Department of Administrative Reforms and Public Grievances, Government of India and Government of Tamil Nadu.

To bridge the existing digital divide: People living in urban areas are already using IT for interacting with Government. Various types of services readily available in big cities are online bill payment without standing in queues, downloading forms, online filing of income tax returns, online banking, railway ticket booking, online hotels reservations etc. But the rural and poor people cannot imagine such a scenario. More and more banks are going online providing Internet Banking. But what about the poor rural citizen who doesn’t even have running tap water. For such citizens, especially those below the poverty line, online water bill payment is a big joke and majority of the State’s Population is rural. Therefore, LokMitra has targeted at improving the quality of life of such people by providing them an interactive interface, which they can use with the help of trained people managing the LokMitra Soochna Kendras at their doorstep without much overheads.

In the 6th National eGovernance Conference held at Chandigarh in October 2002, the Official website of Himachal Pradesh (http://himachal.nic.in) was conferred with the Best Website Award (Silver Icon status). The website of Himachal Pradesh Government has been given this award on the basis of its being oriented towards meeting information requirement of the students, citizens, senior citizens, businesses, Government departments etc.